Here are a few pictures of the children's experience, recital and post-recital supper. 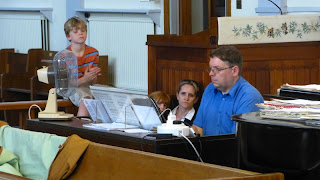 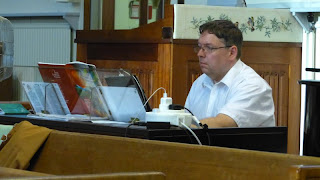 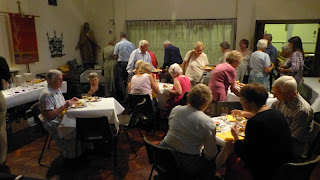 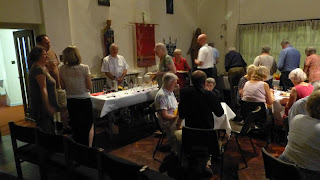 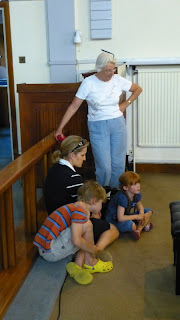 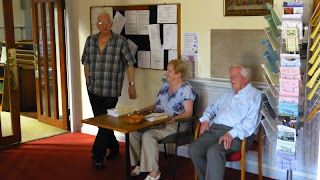 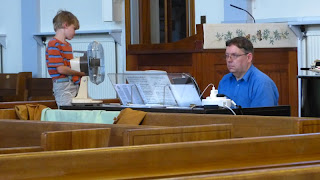 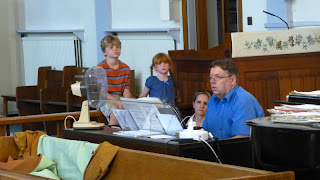 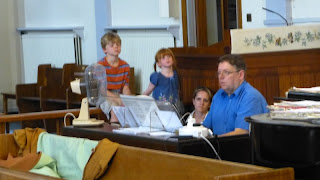 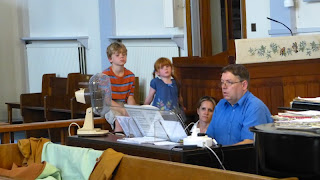 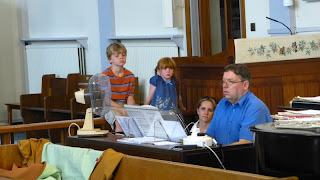 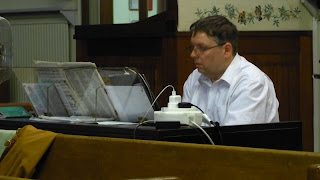 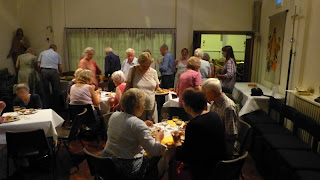 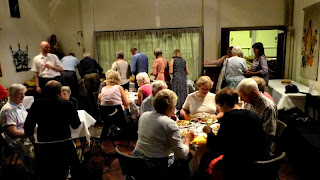 Posted by London Saint at 11:19 No comments: 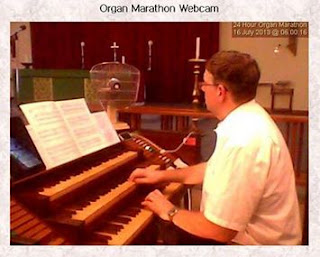 ALLELUIA! It was with Handel’s appropriate words that an eventful St Edmund’s 24-Hour Organ Marathon came to a conclusion. Entitled A Musical Alphabet, the event had begun at noon with an A (an Andrew Lloyd-Webber medley) and ended with a Z (Zadok the Priest with a wonderful added choir of four sopranos and altos). In between – allowing for breaks – there was around seventeen and a half hours of solid organ and piano music.

While each hour was generally devoted to a letter of the alphabet, there were seventeen requests performed whenever the requester was present. These formed quite an eclectic list and ranged from music by Handel, Howells and Widor to Fats Waller, Those Magnificent Men in their Flying Machines and Halfway Down the Stairs by Robin the Frog!

In the afternoon around ten children attended the Children’s Experience. Smoothies were prepared in the kitchen which were most appreciated in the July heatwave. I gave a short explanation of how the organ works and played pieces from James Bond and Harry Potter. Alex performed Doomsday from Doctor Who and several children had a go on the instrument. The rest of the afternoon session was devoted to letters A to F, with composers such as Albinoni, Bach, Chopin, Debussy, Elgar and Faure. The session ended at 6.45pm with a forty-five minute break before the evening recital.

From Advent to Trinity (or, more accurately, Christ the King to St Edmund’s Day) featured fifteen pieces of music from the liturgical year. Starting with Walton’s Crown Imperial and ending with Widor’s Toccata, I celebrated Christmas (Bach), Epiphany (Peeters), Passiontide (Parry), Easter (Bach’s Toccata & Fugue in D Minor), Ascension (Messiaen) and Remembrance (Paradis). I also performed Suite Gothique by Louis Boellmann. After the recital there was an excellent buffet supper provided by Aline with Terry on the bar. It was a beautiful evening and tables and chairs were placed outside for al fresco dining which I have not witnessed before at St Edmund’s. I took the opportunity to have some food and take a break.

At 10pm the music restarted with the letter G featuring Grieg’s Peer Gynt suite. An hour later I performed, in reverse order, the top twenty hymns as voted for in a 2005 Songs of Praise survey. There was a lively atmosphere with much singing and swaying of hands although nobody guessed which hymn was number one (How Great Thou Art). As midnight came and went the numbers thinned out but there were never fewer than two people supporting me and would like to especially thank those who gave up their sleep to support me. Particular mention must go to Ann who was present for practically the whole event and kept me going when things got tough. The following seven night hours were devoted to composers I to R with a variety of music ranging from Mozart and Mendelssohn to Scott Joplin and Queen’s Bohemian Rhapsody.

By 7am I was flagging badly so I was grateful for Jenny’s bacon sandwiches and strong coffee to revive me! I picked up a little as I moved from S towards the end of the alphabet. A sizeable audience amassed as I commenced the last hour with Handel’s Water Music and moved on to his most famous coronation anthem. At the end I received a standing ovation and we all enjoyed a welcome glass of champagne. I was then whisked off home to bed!

I found it much tougher than five years ago and this will certainly be my last marathon in its current format. Currently over £5000 has been raised towards the organ restoration appeal and money is still coming in. The 110 year old instrument has been in situ at St Edmund’s for almost a quarter of a century and is currently in need of some serious attention.

Many thanks to everyone involved in organising, sponsoring and attending this event.

Posted by London Saint at 09:08 No comments:

It's here! Everything's set up and less than two hours to go until the start. Chilling (in the heat!) with a cuppa.
Posted by London Saint at 02:18 No comments:

The official Marathon brochure can be viewed here
Posted by London Saint at 09:29 No comments:

Request Number seventeen - Robert Prizeman's "Songs of Praise" from the BBC TV series (updated 14/7: performing at 0300)
Posted by London Saint at 23:33 No comments:

Webcam was tested today and is working fine - go to www.mark-hammond.co.uk from noon on Monday.

I will also try to put up some audio clips

Posted by London Saint at 08:38 No comments: